We had such a great day going on. I got to leave work early. We were surprised with happy hour at Dairy Queen and got half off our treat order. Lily had a good day at school.

Since we are finally having decent weather in Indiana, we went to the park.

The kids were running and climbing. Really having a great time.

Then, we went to explore the gazebo…

Then, Navy took a tumble off of the bleachers. He stood up on his own, but he was screaming. I looked at the back.of his head. Saw the gash, panicked.

When we got to the car, I called an ambulance. They arrived a couple minutes later. All Navy cared about was seeing the fire truck and exploring the ambulance.

It’s only a flesh wound, right?!

The paramedics dressed his wound, and I took him to the hospital because it was gonna need staples.

He was more interested in TV and toys than his head. He was running around the waiting area like his normal self. He eventually took off his bandage and started throwing it.

Back in his room, Lily was such an amazing big sister. She read to him, blew bubbles at him, and played with him.

We were also really lucky to have Molly, a pediatric patient care specialist at Parkview. She had books and bubbles. She also brought an iPad so Navy could watch one of his favorite TV shows during his procedure. 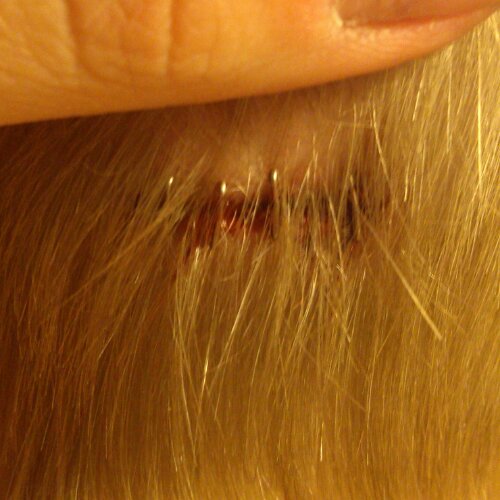 He screamed when they numbed him. I felt awful. Thankfully, it was a rather quick process after that.

We go back next week for removal. I hope it’s less painful, but just as quick.