After a busy day of drop offs, pick ups, and errands, I took the kids to the park to run off some energy. It was a nice day, and there were still some patches of snow on the ground.

They were playing so well together. Swinging on the monkey bars giggling. I hung back because my mere presence seems to tip the balance.

They moved to the slide/climbing platform to play ogre tag. I don’t know the rules they made up, and I really don’t think they do either. They were just having fun and sliding into little piles of snow at the ends of the slides.

Then, it happened. He jumped.

He landed on his feet and seemed to be okay. He tried to stand up and started to fuss before sitting in the wet snow.

I took his boot off, and there was no obvious trauma, but he refused to stand on his own.

My boy was hurt.

Thankfully, RediMed is really close to the park.

While I was filling out his paperwork, he was talking around the waiting room to get to the toys. I started to think he was faking it.

During the exam, he only had pain in one spot. When asked why he jumped, he told the PA that his sister dared him to. An x-ray was ordered, just to be on the safe side.

He wasn’t faking it. He broke two bones in his foot. Since he has jumped off of the x-ray table (yes, really), we were referred to Fort Wayne Orthopedics for a cast. 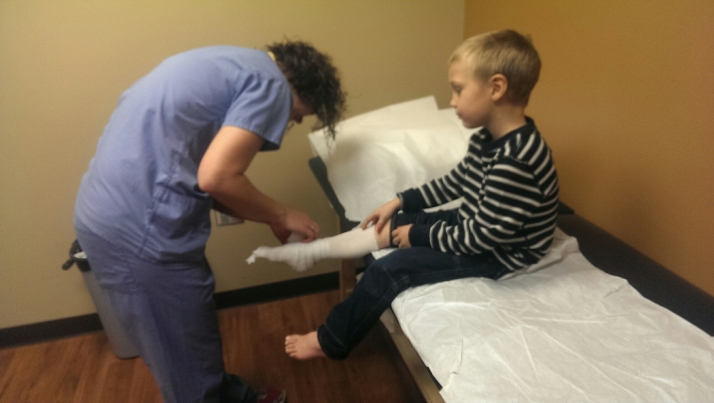 After a rough evening, we had a fast food dinner and headed home.

Navy was so exhausted from his day!

He will be in this cast for 2 weeks, then we go back to see how the bone is healing.

Tomorrow, we need to see about getting him a walker.