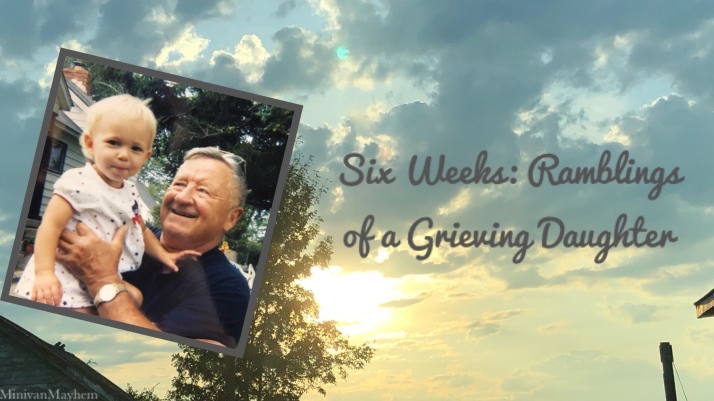 It’s been 6 weeks since Dad passed away.

We’re cleaning out his house to get it ready to sell. That’s hard. He’s lived there my entire life. It’s his house. The thought of someone else living there, and it not being Dad’s house, it kind of hard to grasp. It’s always been his.

His things are another matter. It’s his. Realistically, I know that we don’t need to keep everything that he had. He has 83 years of stuff in his house. I keep thinking that these things were his. Once they’re gone, that’s even less that he have that was connected to him.

I cry less. There are still moments that take my breathe away and break my heart, but those moments are less and easier to recover from. The reality of him being gone is still kind of hard. Everything is a memory now, and knowing that there will be no new memories hurts.

The kids seem to be coping well. Navy has a hard time some nights. He has been wearing Papa’s favorite flannel jacket a lot. He wants to keep everything that we have that was Papa’s, even things like his walker. Lily doesn’t show her emotions much, but she doesn’t seem to mind talking about Papa. She grieves in her own way, quiet and alone most of the time.