The kids have been not-so-patiently waiting for snow. Snow boots were out of sight, but not out of mind. I had two very bummed kids when it turned cold, but no snow.

Then, it snowed. Not much. Enough to lightly cover the grass and make the commute eventful.

Lily threw snow. Pretty interesting effect. We both thought it was cool. 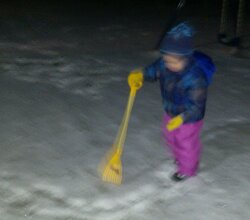 All of the pictures I took looked great when I was standing outside at 7pm when it was only 18°F outside. Go in to edit. Blurred. Bummer.

Lily asked if she could earn a dollar for shoveling the drive. The catch, Navy was gonna help her, and I had to pay him a dollar, too. She drives a hard bargain!

Still working on the drive… 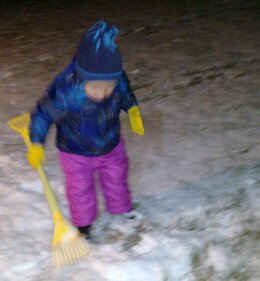 Yes. He is wearing magenta snow pants.
Yes. They are girl snow pants.
No. He doesn’t care.

Attempting to launch snow at me. Fortunately, she missed. That would not have ended well.

I hope this snow storm we are supposed to get on Friday and Saturday actually hits us. The kids could really use the chance to blow off some steam!