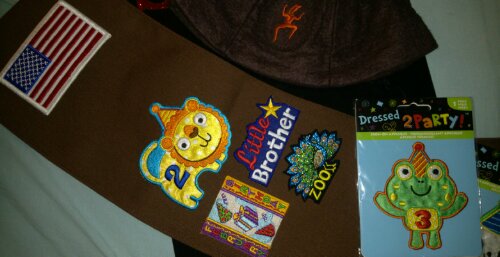 Navy is 2. He sees his 6-year-old sister put her Girl Scout Daisy uniform and head off to adventure.

Sometimes, he gets to tag along to her meetings. They are filled with stories, giggling, crafts, and snack time.

Who wouldn’t want that?!

When I was picking some things up at ScOutfitters for Lily, I picked up a Brownie sash for Navy. The Brownie sash was much cheaper than the Daisy tunic, and he will be entering kindergarten when Lily heads into Juniors.

I also bought some numbered birthday patches from Michael’s for Navy’s sash.

When checking out, the cashier said another troop had some little brothers who were kinda jealous and tagged along. They got them Girl Scout shirts and called them the Cookie Crumbs.

He adores his sister. Girl Scouts is teaching Lily to be an empowered, compassionate young lady who is active in her community. Sharing that with her little brother is a good thing.

I think Juliet Gordon Low would be proud.